New York City takes to the Streets for the Holy Innocents

[New York, NY – December 30, 2020] Photography and text by Jeffrey Bruno. As the darkness of night gave way to the dawning day on the streets of New York City, stormy skies opened and a gentle rain began to fall. The city streets, slick with rain, reflected the falling footsteps of those shaking off their sleepiness and making their way to the places people go on a dreary Friday morning.

But this Friday would be unlike most Fridays for those on their regular morning commute: Subway cars filled with the flowing white and blue, blue and gray, and gray and black habits of a sea of nuns, making their own way to a destination deep within the heart of the city. Friendly faces adorned with veils would greet the early morning straphangers on this day.

The day was the Feast of the Holy Innocents, a commemoration harkening back to the tragic slaughter of innocent children killed by a king so desperately clinging to power that he made the streets of Bethlehem run red with their blood.

At 7:30 a.m., the doors opened at the Shrine of the Holy Innocents on West 37th Street to a flood of friars, nuns, priests and layfolk, all speaking in hushed tones and warmly greeting each other as they slid into the awaiting pews. Judging by the ocean of habits crowding the aisles, it seemed as if those Christ had called to serve were also called to this very place on this very day en masse.

The roar of the hundred-year-old pipe organ echoed off the domed ceiling, accompanied by the angelic voices of the choir flooding the cavernous space with the sound of transcendent beauty. Bishop Peter Byrne, who famously spent months counseling bereaved families in the wake of 9/11, made his way to the altar along with several priests of the Franciscan Friars of the Renewal to celebrate and lead the faithful in the highest form of prayer, the Mass.

Fr. John Paul Ouellette CFR preached the homily and spoke of the “supernatural hope” that every Christian must anchor themselves in and that it is only in living in God that any real peace can be attained, “… peace of mind, peace of heart and peace of soul.”

As the Blessed Sacrament was placed gently in the monstrance on the altar after the final blessing, the gathered gazed in Adoration and began the Rosary in preparation for the procession through the concrete canyons of midtown that was about to begin. 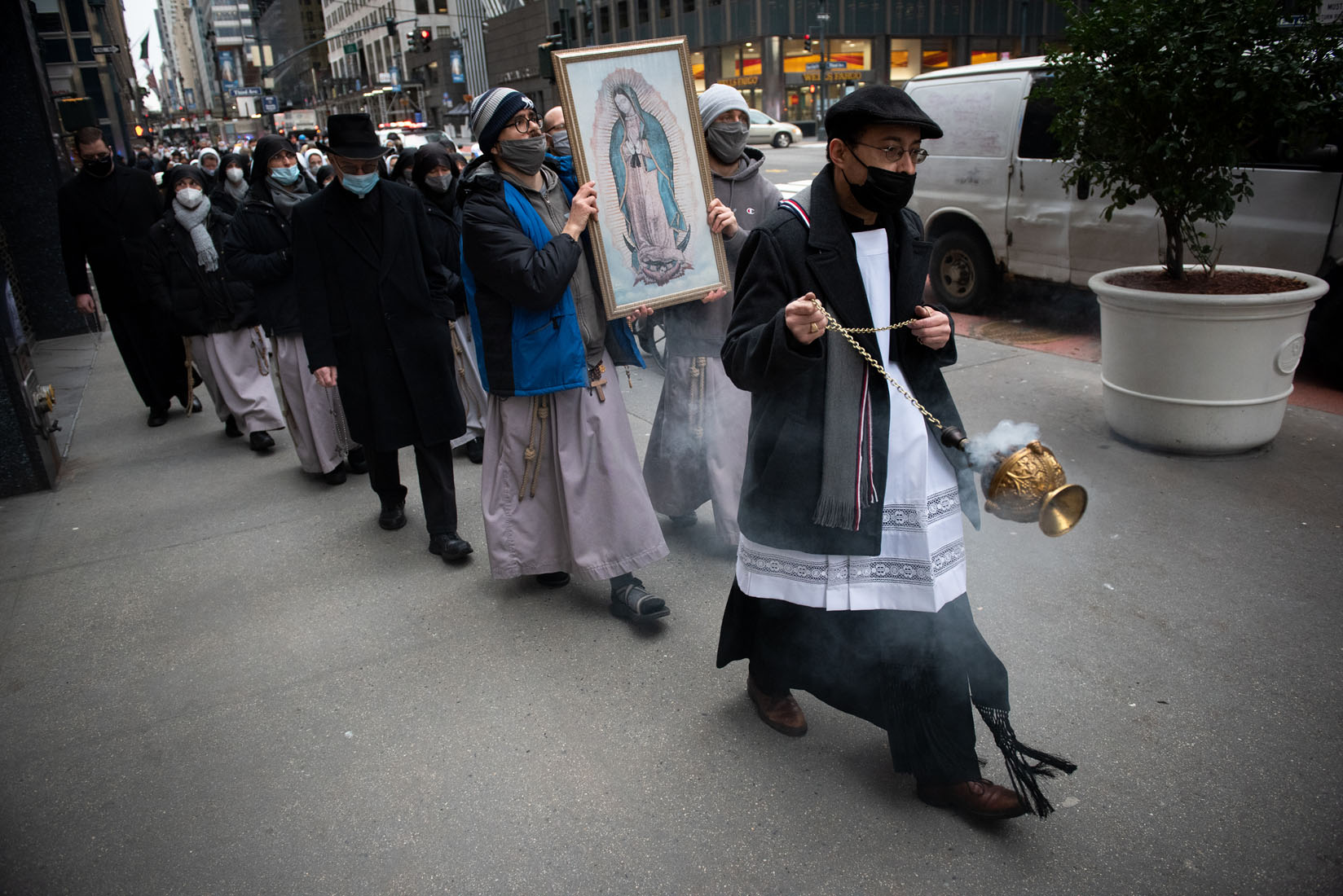 They descended from the Shrine down the steep stone steps into the now pouring rain, umbrellas clicking open and rosary beads dangling, but spirits never dampened.

Each Hail Mary scratchily broadcast through small walkie-talkies pierced the cacophony of the big city streets.

As the procession stepped through the puddles on 42nd Street, an awestruck family of tourists paused and blessed themselves, a deli worker came out to bow in reverence, and a man in a passing truck leaned his head out the window yelling “Pray for me!” 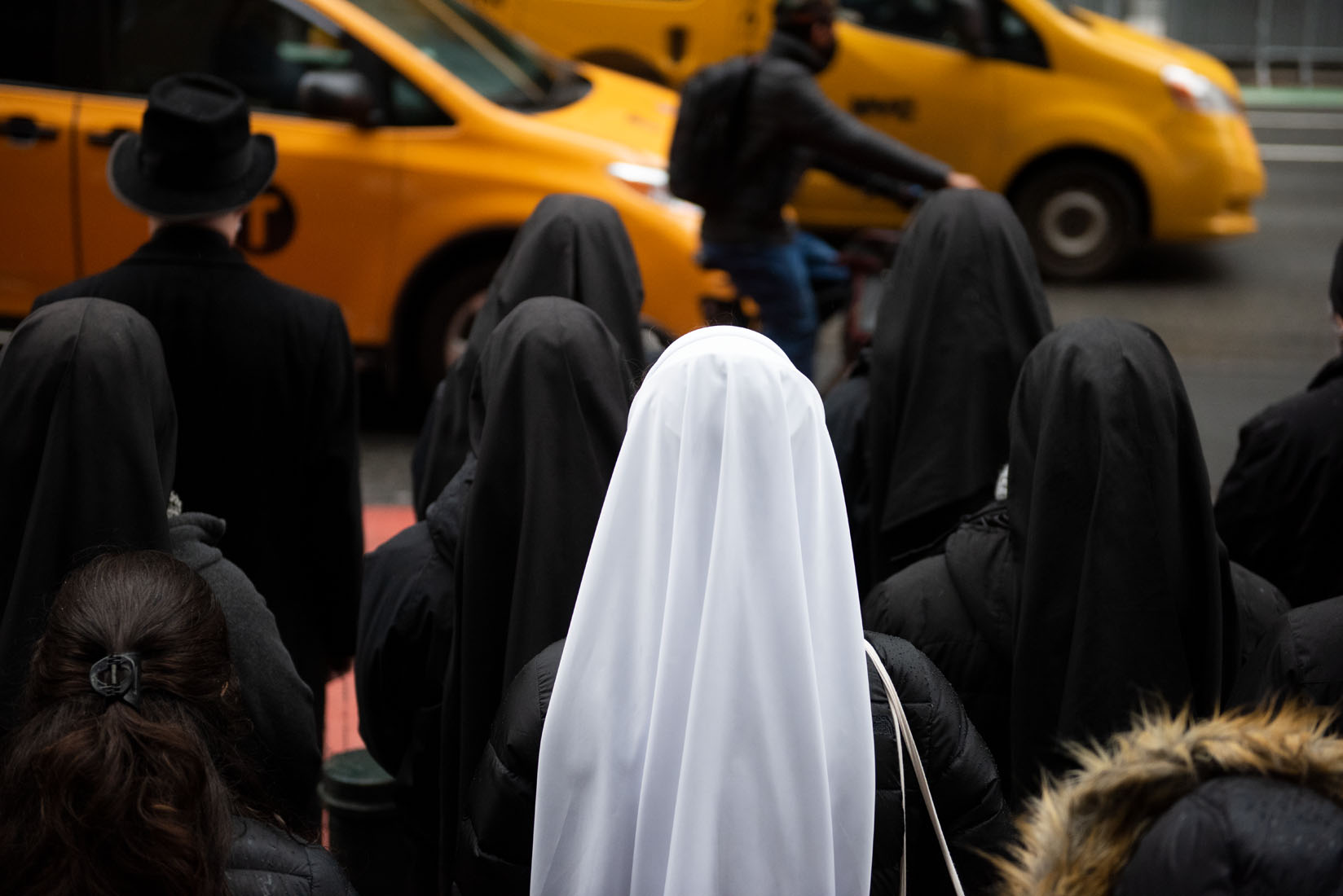 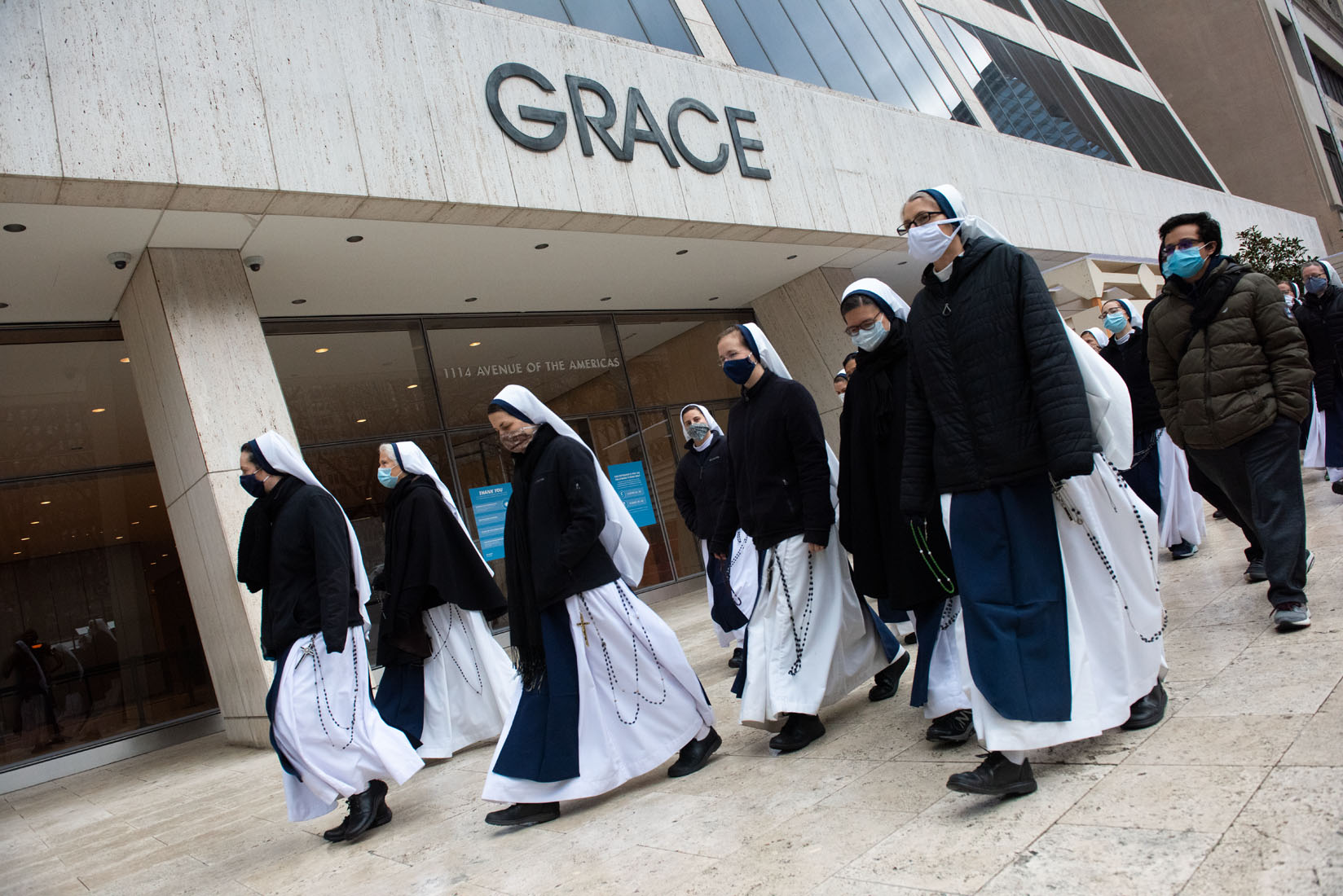 The simple witness of the procession and the power of their prayers immediately impacted the people they encountered, bringing the city of stone and steel what it needs most.

And as the rains fell throughout the day, as if the tears of the mothers of those Holy Innocents were washing the city in grace, the city of hope was getting what it most longs for, even without knowing it — what everybody most longs for: supernatural hope. 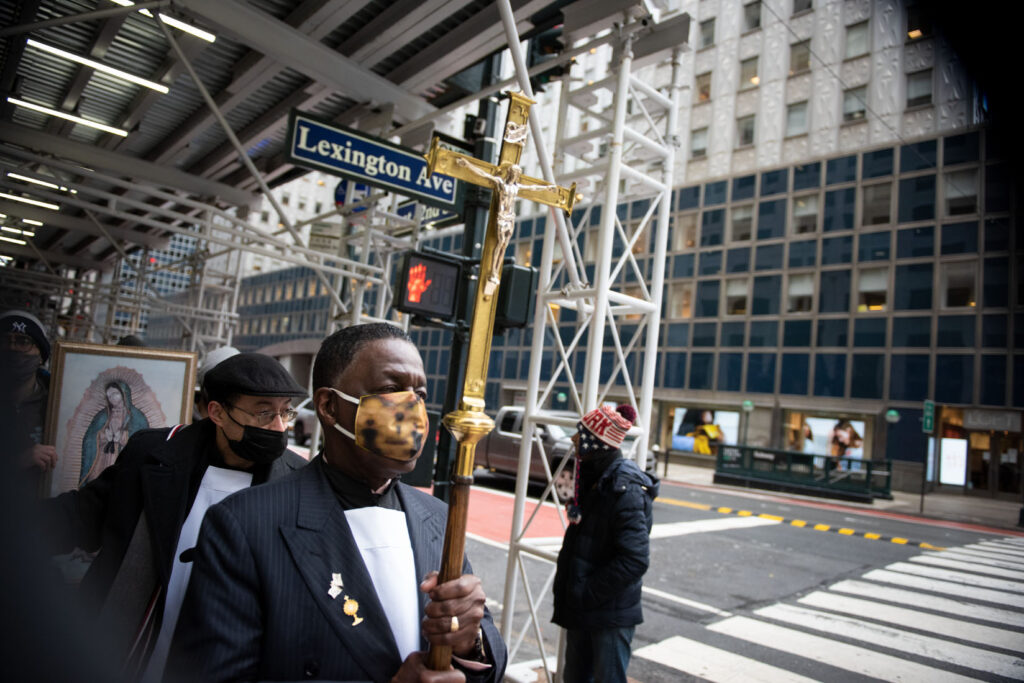 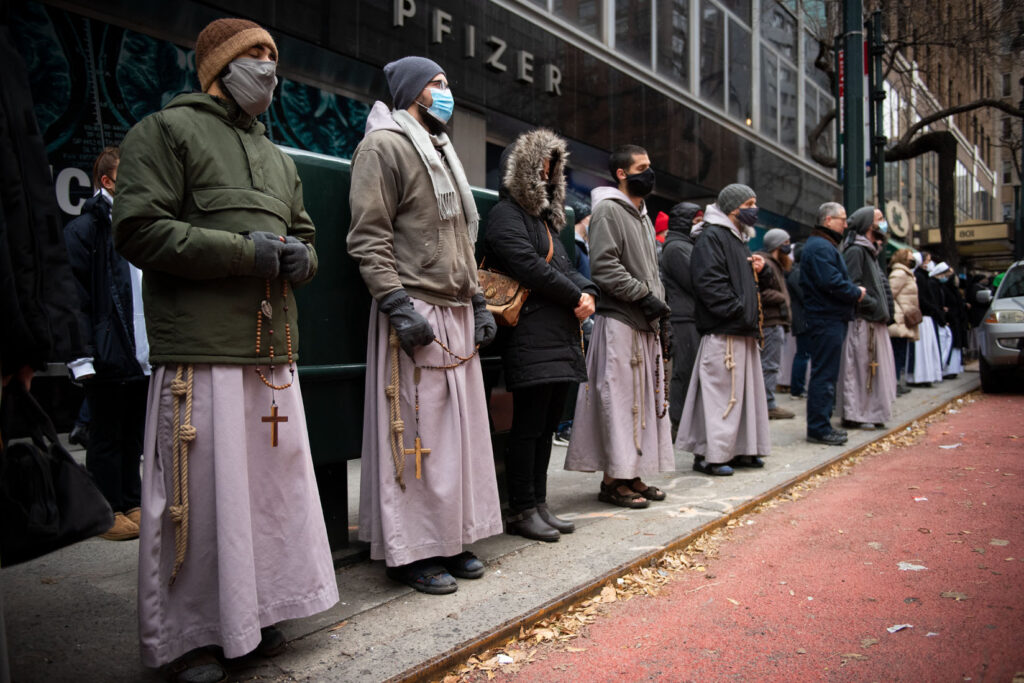 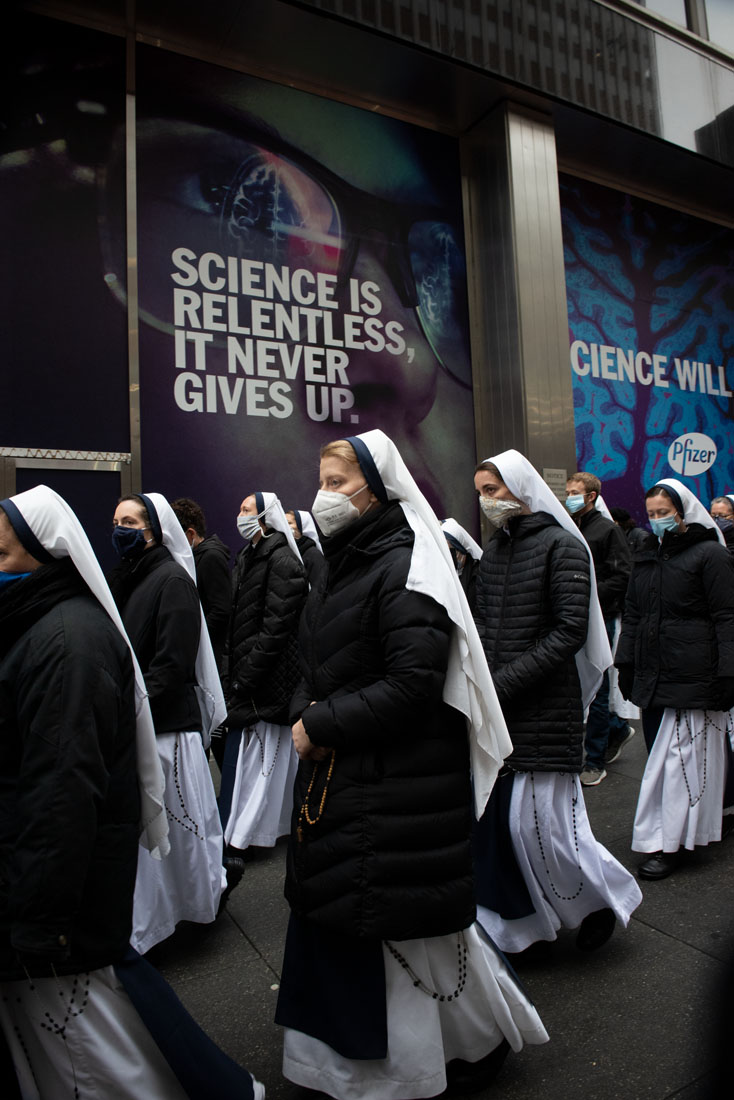